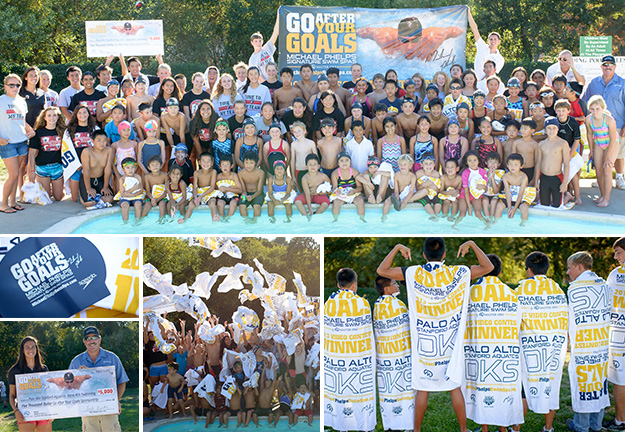 Palo Alto Stanford Aquatics – Dana Kirk Swimming (PASA-DKS) showed the world their passion for swimming and swam away with a $5,000 sponsorship in the Go After Your Goals Video Contest. The goal of the contest, which was organized by Michael Phelps Swim Spas by Master Spas in partnership with USA Swimming, was to create a forum for teams to display their passion for the sport of swimming and the importance of setting and working toward their goals.

PASA-DKS did just that! Along with individual swimmer goals, the team set an ambitious goal of doubling the number of swimmers competing in sectionals in 2014, from five to ten. Coach Dana Kirk realized in order to achieve their goals they were going to need to incorporate more dry-land training.

“We are a small club with limited resources, the sponsorship allowed us to purchase dry-land training equipment that we didn’t have before including seven spin bikes and gym rings,” said Kirk. “Dry-land training plays a key role in increasing both strength and endurance and cross-training keeps workouts interesting for the kids.”

The swimmers of PASA-DKS took full advantage of the new equipment; even coming to practice to complete dry-land workouts on days when rain prevented them from swimming. Their dedication and hard work paid off with ten swimmers qualifying for sectionals.

According to Kirk, the best part of the contest is the way it brought the team together.

“One of the challenges with age-group swimming is that there are many different ability levels within the team, which can make it difficult for the group to bond with everyone working toward individual goals,” said Kirk. “The process of creating the video really brought them together to work toward a common goal and it allowed two of the older swimmers to step into leadership roles.”

The team enjoyed the experience of creating the contest video to such a degree that they followed it up with a video to say, “thank you” and to show Master Spas the impact of the sponsorship.

“Michael’s dedication to achieving his goals was the inspiration for the promotion, so seeing how the kids used the sponsorship to achieve their goals was rewarding,” said Bob Lauter, CEO of Master Spas, “we’re excited to watch Michael as he continues to go after his goals.”

Through its Michael Phelps Swim Spas line of products, Master Spas is committed to providing both fitness and competitive swimmers with the ability to train at home and achieve their goals.