Michael Phelps Signature Swim Spas by Master Spas are once again drawing a sizable crowd with the Michael Phelps Swim Spa Challenge at the USA Swimming Aqua Zone, a 100,000-square-foot fan experience area outside the U.S. Olympic Trials-Swimming at the CenturyLink Center in Omaha. On just the third day of competition, over 900 swimmers have already taken the challenge. 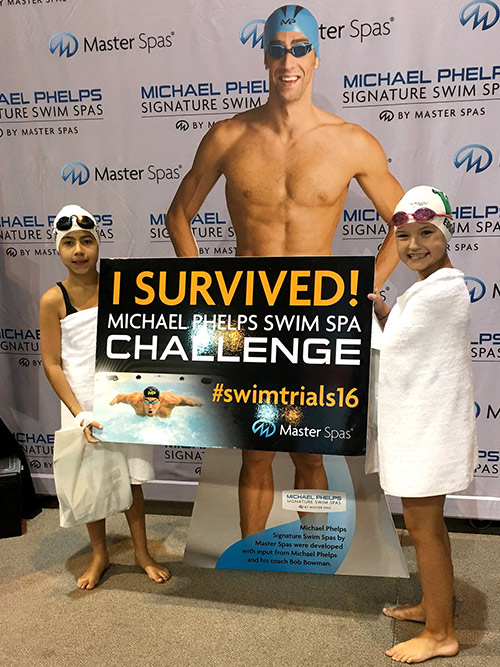 In the Master Spas exhibit area, challenge participants swim against the current in a Michael Phelps Signature Swim Spa by Master Spas. "During the challenge, the current is set at the pace Michael Phelps uses for training, which is pretty fast, even for experienced swimmers. And he swims for 12 minutes at that pace," stated Kevin Richards, Master Spas Vice President of Sales and Marketing.

Challenge participants enter the swim spa, and after a short warm-up, the swim spa propulsion system increases the current to Michael Phelps’s training pace. Participants attempt to swim just three minutes. It’s a tough challenge, but some swimmers with excellent stroke technique and stamina have proven that they are up to the task.

"It’s fun to see a swimmer go up against Phelps and swim at his pace for the full three minutes," stated Richards. "It’s quite an accomplishment, and it’s evident that they are well trained and motivated to achieve their goals."

The swim spa used for the competition is the MP Signature™, featuring the patented Wave XP Pro Propulsion System, which is the most powerful of the Wave XP Propulsion™ Technology System options, all of which generate a smooth water current that is adjustable for individual resistance levels.

Richards summarizes: "Master Spas is committed to providing both fitness and competitive swimmers with the ability to train at home and achieve their goals. But there is nothing like taking the challenge to see how they stand up against one of the greatest swimmers of all time."

In addition to fitness and competitive swimming, Master Spas, along with the Michael Phelps Foundation, are committed to addressing the need for water safety programming. Attendees can learn more about the Michael Phelps Foundation's signature program - im - and Master Spas’s support of the Foundation, which has included the launch of the im program at the Boys & Girls Club of Fort Wayne.

The Michael Phelps Swim Spa Challenge is open to the public from June 26 through July 3, when the Olympic trials end. Master Spas expects that over 3,000 individuals will take the challenge during the event.

Those who coudn't be in Omaha, but would like to see how they stack up against Michael Phelps by taking Swim Spa Challenge, or simply try out a swim spa, can locate their nearest dealer.

Master Spas is the largest portable spa, hot tub and swim spa manufacturer in the world with all products built in the U.S.A. Read more >
For more about the Michael Phelps Swim Spa Challenge in Omaha, visit us on Facebook and Instagram.

The Michael Phelps Foundation is a nonprofit organization focused on growing the sport of swimming and promoting healthy and active lives, especially for children. Michael Phelps established the Foundation with the $1MM bonus he received for winning eight gold medals at the 2008 Beijing Games. The Foundation, in partnership with KidsHealth and the Michael Phelps Swim School, has developed and launched the im program, which has reached over 15,000 Boys & Girls Club members and Special Olympics athletes with life-saving programming. They have also established the Level Field Fund-Swimming, a grant-giving program that provides funding to uniquely talented swimmers in need of financial assistance, and offers autographed swim caps for charity auctions through Caps-for-a-Cause. For more information, please visit us online at www.michaelphelpsfoundation.org, on Facebook, on Instagram, and on Twitter.