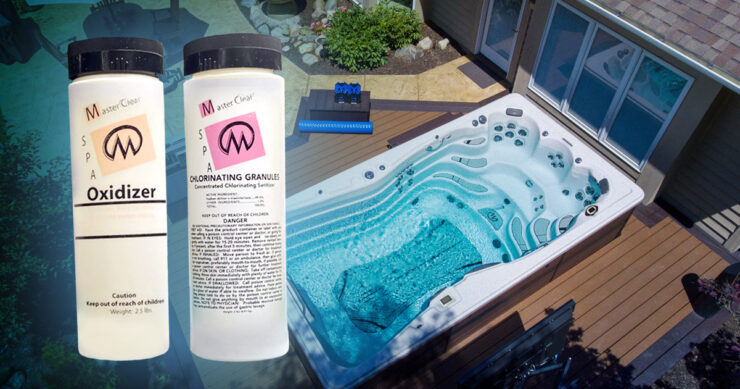 Are you ready for a shocking insight? There are different ways to sanitize your swim spa water. Oxidizer, chlorine, bromine, shock treatment — there are myriad products on the shelf for spa owners. But each product is not created equal and can’t be used the same.

When you own a swim spa, you want the water to be clean, clear, and inviting. A sanitizer, like chlorine, is key to being able to safely enjoy the water. But a shock treatment, also known as an oxidizer, is not the same. These two products should both be used as part of your swim spa chemical routine.

How do you use oxidizer or chlorine?

For Master Spas swim spas, you should use dichlor granules as a sanitizer and a non-chlorine oxidizer as a shock treatment. These products work side-by-side with the EcoPur filtration system, taking advantage of natural minerals to purify your water.

Dichlor will latch on to the things you don’t want in your water — bacteria, algae, and other organics. With the chlorine attached to the contaminants, the cell walls are broken down. The contaminants become, well, useless.

What happens next? For that, we need to revisit high school science class and the lesson on Sir Isaac Newton. According to Newton’s third law for every action, there’s an equal and opposite reaction.

Yes, Newton was a physicist but this concept also applies to swim spa water care. The chemical reaction between the dichlor and organics will create a by-product. These chloramines are also known as combined chlorine, or total chlorine if we’re talking chemical levels.

You will need to keep your chlorine between 2 to 5 ppm for effective sanitation. If your total chlorine is above the recommended range (and your free chlorine is low), there are too many chloramines in the water.

The solution? A shock treatment. Adding an oxidizer to your water can break up the chloramines and keep your water fresh.

You know the smell. It’s familiar, almost comforting. Whether it’s at a local community center or gym, you are greeted with it the moment you walk onto the pool deck.

What is it? Chlorine.

But while you are used to a pool smelling like chlorine, your spa water should not have an odor. And you definitely don’t want it to smell like chlorine.

The shocking agent, typically a non-chlorine oxidizer, breaks down the chloramines so that they can help in the sanitizing process. Basically, it becomes chlorine again.

In addition, the non-chlorine oxidizer removes other contaminants such as body oils, lotions, and sweat.

One of the benefits of using a non-chlorine oxidizer is that it allows your chlorine to do its best work in the swim spa water. The oxidizer breaks down chloramines and other organics, which deplete your chlorine.

You will notice that after using an oxidizer, your water will smell fresher and be gentler on the skin.

Swim spa owners should use a non-chlorine shock treatment about once a week, or when the total chlorine is higher than the free chlorine.

When do you add chlorine? You should add a small amount after each use. Be sure to follow the manufacturer’s recommendations, which you can find on the bottle.

Dichlor and trichlor are likely the types most familiar to swim spa and pool owners. These types of chlorine are stabilized with cyanuric acid, which acts as a sun protectant for the chlorine.

Dichlor and trichlor might have similar properties but, they cannot be used interchangeably.

Dichlor chlorine granules are pH neutral, which is why it’s recommended for swim spas. Most dichlor has between 55% and 62% active chlorine.

To add chlorine to your swim spa, simply sprinkle it over the surface of the water and turn on the jets. You should notice that it dissolves quickly, which is a benefit of using dichlor in your swim spa.

A quick note: Do not pre-dissolve the chlorine in a bucket of water with water. While pool owners might do this, it is not recommended for swim spa owners.

Are you wondering about the other types of chlorine, especially trichlor?

A swim spa is a pool alternative. But it’s not a pool. Maintenance and water care does vary, especially when it comes to chlorine.

Many pool owners use trichlor tablets. However, you should not use these in your swim spa. They dissolve more slowly and are more acidic when compared to dichlor granules. Pool chlorine can discolor the acrylic of your swim spa along the water line.

How to buy a pool alternative

Do you want to enjoy the benefits of a pool without the maintenance? A Master Spas swim spa allows you to swim-in-place, exercise, relax, and just hang ut at home. You can click here to get more backyard ideas and picture what a Michael Phelps Signature Swim Spa would look like in your space. Or, contact your local Master Spas retailer to learn more about swim spa ownership. Wondering how much a Michael Phelps swim spa costs? You can request a quote here.